IFT understands the important role of institute facilities to personal and academic development and thus, optimising facilities to provide a first-class teaching and learning environment for students, staffs and other users is never a doubt.

Sustainability is one of IFT’s foremost strategies when it comes to facilities. The aim is to offer a cutting-edge physical and technological environment for both teaching and learning. The way the Institute combines modern academic resources with a friendly environment for social interaction and accommodation enhances the experience of students, teachers and other staff in it.

Students at IFT have access to purpose-built facilities such as computer rooms, demonstration kitchens, a training restaurant and a training hotel; they are also welcomed to use 2 libraries, and their electronic information services and computing facilities.

In academic year 2017/18, IFT continues to improve and optimise facilities at Mong-Há Campus and Taipa Campus. Pousada de Mong-Há is undergoing a refurbishment and its facilities will be upgraded; the design and planning of the new educational hotel at Taipa Campus were implemented, and 2 new chillers were replaced to enhance the ventilation in Forward Building. While at Taipa campus, supporting facilities and the environment in general had been continuously improving on each floor of East Asia Hall. A new student study room and dining area were established on the ninth floor also. Barrier-free facilities are to be upgrade progressively in each campus building in order to provide a more integrated learning environment for all students.

In April 2018, Campus Services Team passed the Quality Management System audit and had successfully gained the ISO9001:2015 accreditation. This means the quality of facilities management and campus services provided in IFT are up to par and will be improved continuously. 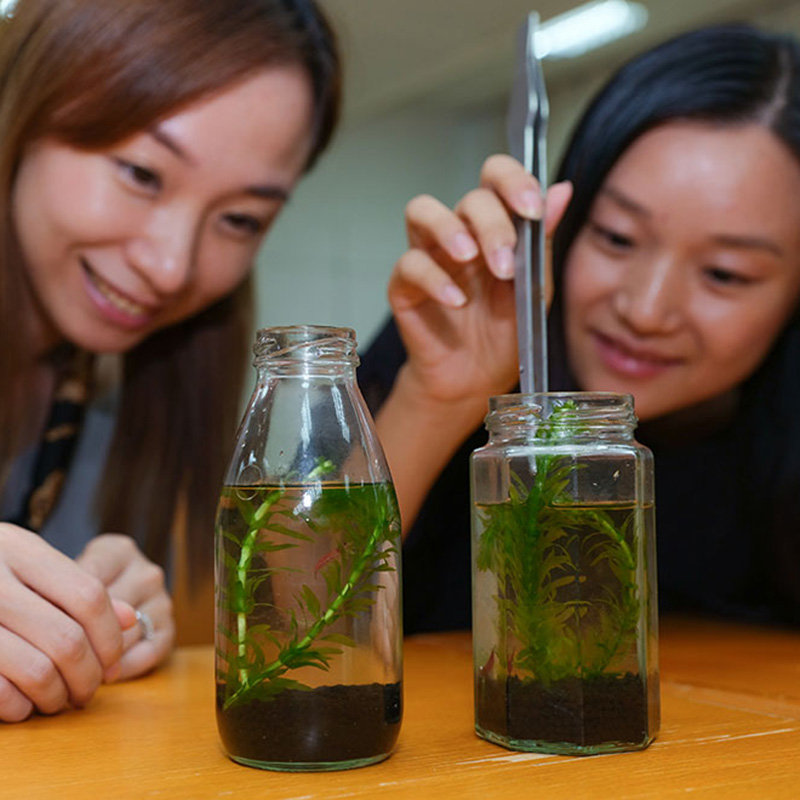 In terms of safety, the Institute has been conducting threat drills, chemical spill drills and fire drills for the 2 campuses and different departments. The drills had been revised and modified to meet the constantly growing standards.

During the summer vacation, Judicial Police was invited to conduct a safety inspection at both campuses. IFT had also participated in a Workplace First Aid Course by the Labour Affairs Bureau and another seminar on “Disaster Preparedness and Response”. The programmes and events had enhanced IFT’s readiness for disasters and accidents.

Students at IFT gain hands-on experience of the hospitality industry at 2 training facilities on the IFT Mong-Há Campus: the renown hotel - Pousada de Mong-Há and the highly recognised restaurant - Educational Restaurant. They are open to the community, serving as a mock working environment for students to serve guests with real diners. 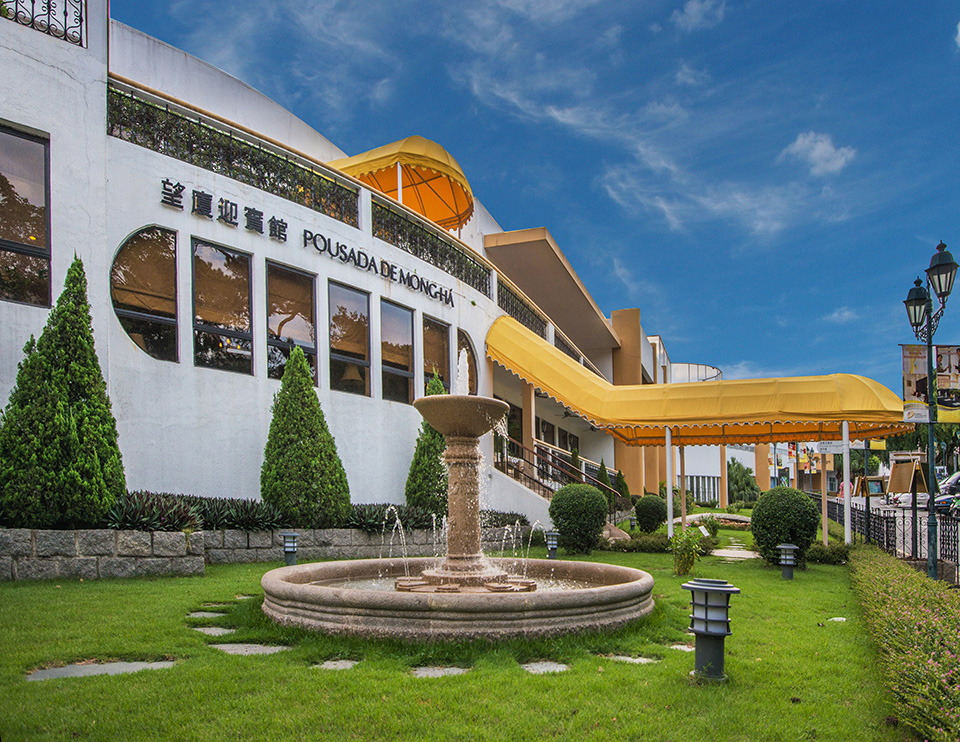 The Portuguese word “pousada” means “a place of blessed repose”, which also brings out the 2 aims of the Hotel: to serve travellers from around the world and provide the best accommodation possible.

In order to optimise services as well as facilities of the Pousada de Mong-Há, the hotel has been undergoing a refurbishment project since January 2018, and the entire project is expected to complete by end of 2019, when valued guests will see a brand new and modern environment with a historical touch. With Pousada continuously being a preferred choice of many families and business travelers alike, these extensive renovations will surely make guests’ future stays even more delightful.

The IFT Educational Restaurant is an establishment where students are coached and supervised by experienced instructors to gain rich and practical experience of the restaurant business.

The Educational Restaurant’s menu embraces both Macanese and Portuguese dishes, which represent the uniqueness of Macao’s history and distinctive cooking methods. The restaurant supports organic farming and the Slow Food movement. All herbs for seasoning uses are grown in a herb garden at the Mong-Há Campus.

From time to time, the restaurant brings cuisine and gastronomy from around the world to gourmets’ plates. Seasonal menus, Macanese menus as well as Valentine’s Dinner menu are offered in different periods of the year, bringing every food lover the most surprising trip of smell and taste.

As Macao was designated as UNESCO Creative City of Gastronomy, IFT has taken up the responsibility to promote Macao cuisines to different parts of the world in the past year. During 15 to 20 May 2018, Chef Chon Kin Kei and Tong Ion Keong went to the “Dynamic Macao Promotion Week - Fujian Fuzhou” in Fuzhou. On 31 May to 5 June 2018, Mr. David Wong and Chef Hans Rasmussen took part in a series of events to promote Macao as the Creative City of Gastronomy in Parma, Italy, on behalf of IFT and then the “Kavala Fresk Feastival” in Cape Verde during 9 to 20 July 2018. All events are well received. 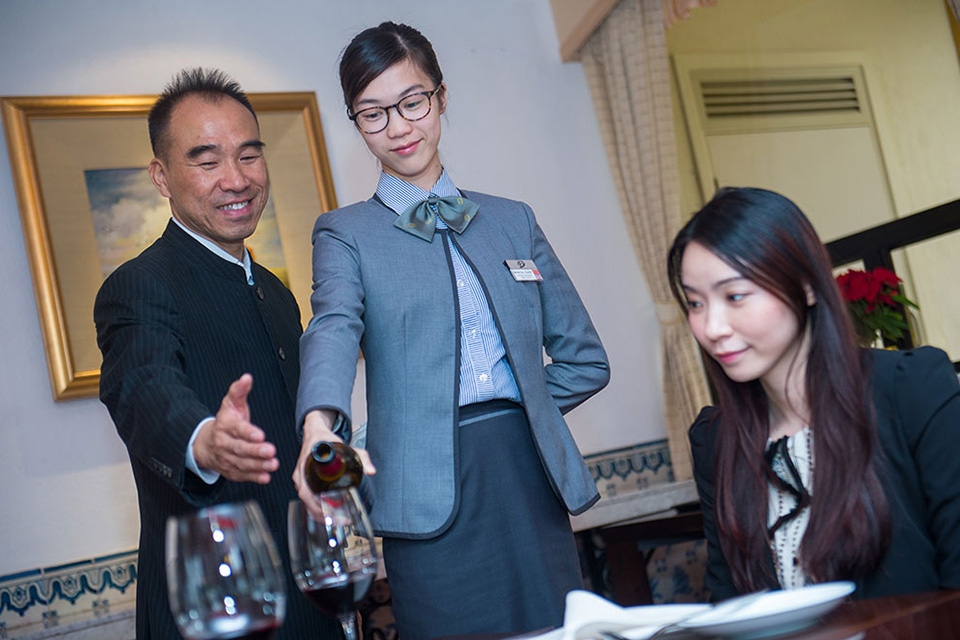 Out of the Common Run 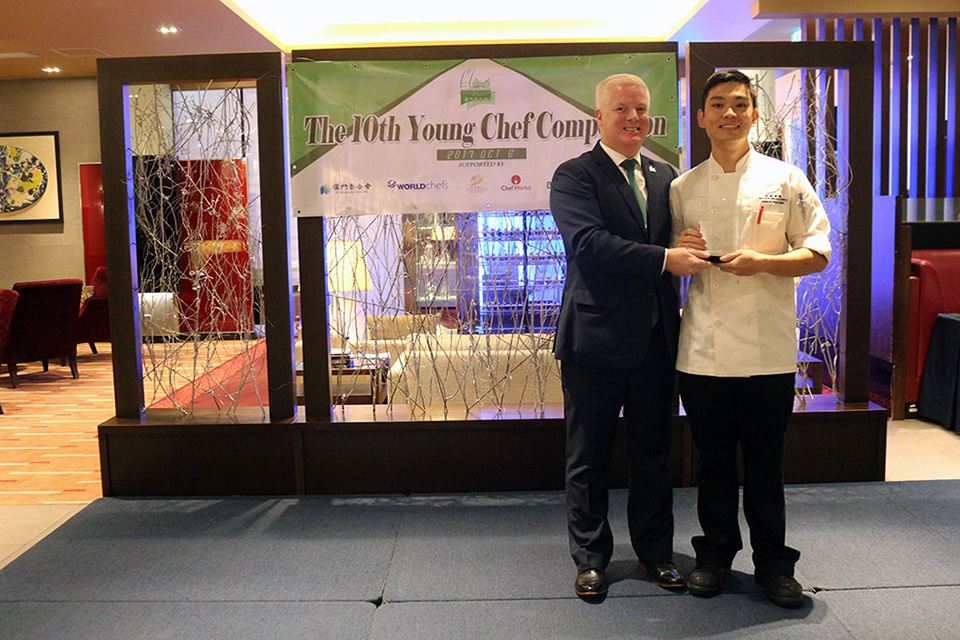 The 10th Young Chef Competition was organised by the Macau Culinary Association and coorganised by IFT took place on 6 October 2017.  This event serves as a testing ground for young and talented chefs to demonstrate their skills.

In the competition, each contestant has to prepare 2 servings of a 3-course meal within 3 hours. One serving is for the judges to taste and the other one is for them to assess how the dish is being presented. Two 4th year IFT students pursuing bachelor’s degrees in Culinary Art Management took part in the competition and competed against eleven other competitors at the final round. Paul Lam Chi Kin, one of the mentioned IFT students, won the first prize.

IFT libraries are dedicated to meet the lifelong learning, reading and demand of information needs of students, staff and visitors. Currently, IFT has 2 libraries, one in Mong-Há Campus and the other, in Taipa Campus.

With a total gross floor area of 700 square metres, the new IFT Taipa Campus Library was officially opened in August 2016. It has different reading areas, with movable furniture that provide students the flexibility to tailor their environment for learning. There are also a computer zone, and nooks in which readers can read magazines. The new library, like the library in Mong-Há Campus, provides its users a tranquil environment for study, relaxation, and research. 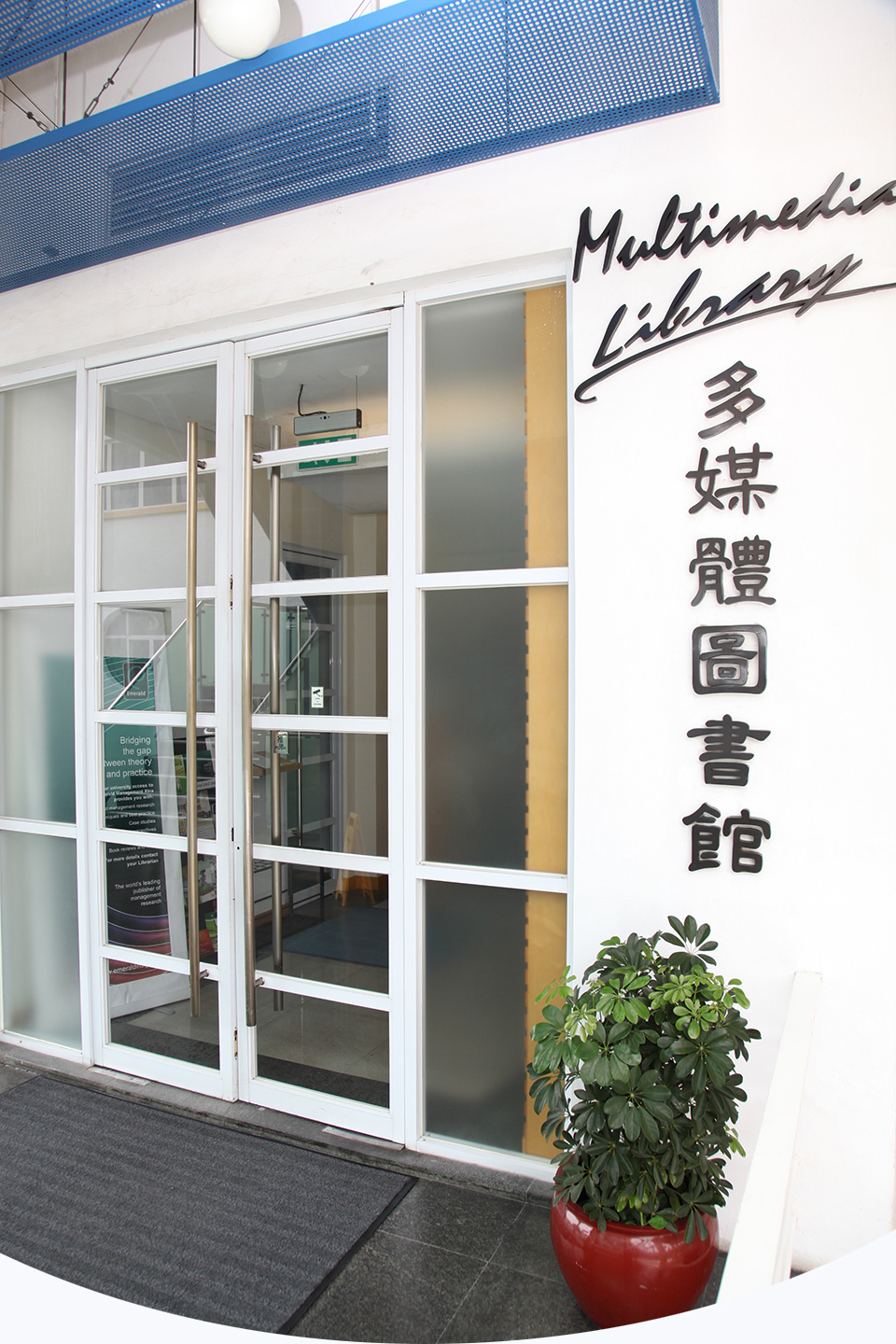 Academic year 2017/18 marked as an important year for the IFT library as it was elected one of the Council members of the Guangdong-Hong Kong-Macao University Library Alliance from the Macao region in December 2017. Founded by the University of Macau Library, the libraries of Sun Yat-Sen University Library, and the Chinese University of Hong Kong Library, the Alliance was established in June 2017 to promote cooperation and resources sharing among libraries in the 3 regions. The Alliance optimises inter-library loan services, document delivery, publications exchange and staff training, establishing an “One-hour Library Circle”, which makes easy academic exchanges, promotes research collaborations among the 3 regions, and provides support to the development of the Greater Bay Area.

The Macau Academic Library Alliance (MALA) representatives had attended the 84th IFLA World Library and Information Congress in Kuala Lumpur, Malaysia. IFLA was founded in 1927 and is an international body representing the global voice of the library and information professionals across 140 countries and more than 1,400 members. The IFT Library has held an Institutional Membership of it since 2014 and attending the congress. The Alliance allows students from one higher education institute to borrow library materials from libraries at any of the other 8 institutions of higher education in Macao.

Since 2016, IFT has become a member in Greater China to join the World Tourism Organization (UNWTO) depository library. The objective of the programme is to provide easier access to reports and other publications published by UNWTO to public users. 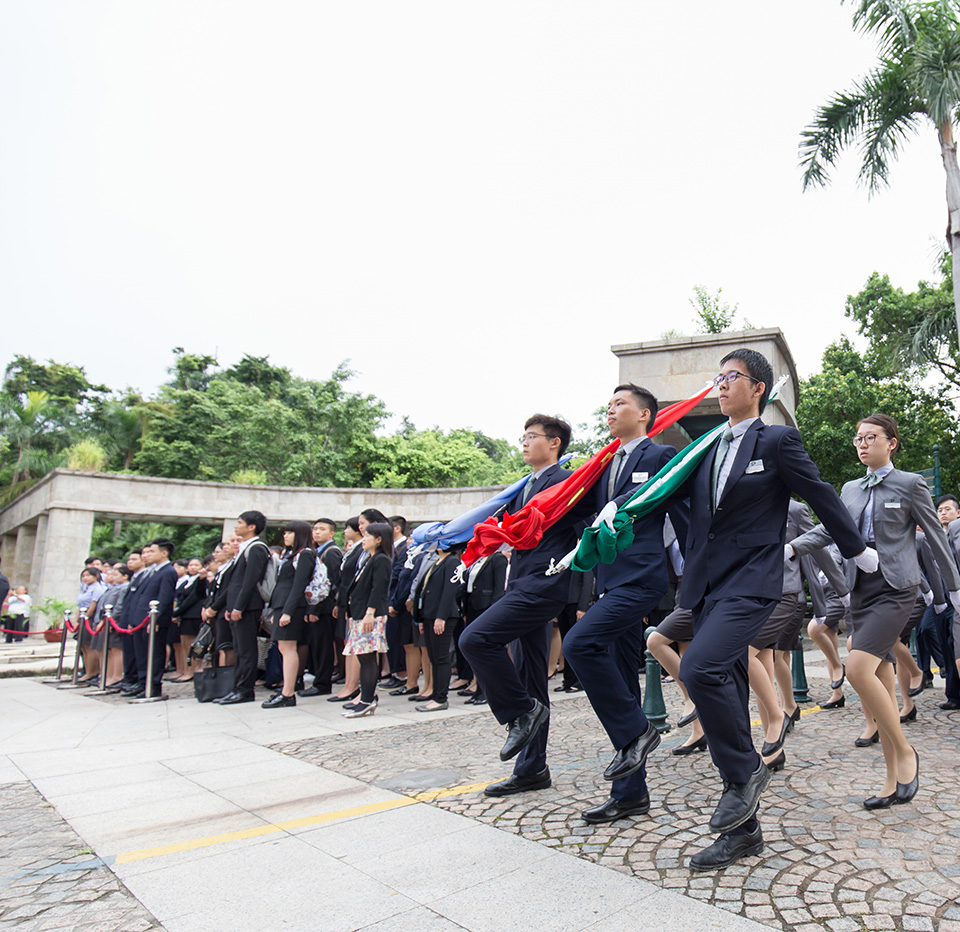 IFT held its first National Flag-raising Ceremony on campus on Student Orientation Day. A total of more than 400 students and faculty members attended the ceremony. The Flag-raising Ceremony aims to deepen the sense of national identity and foster the love for our mother country and Macao.