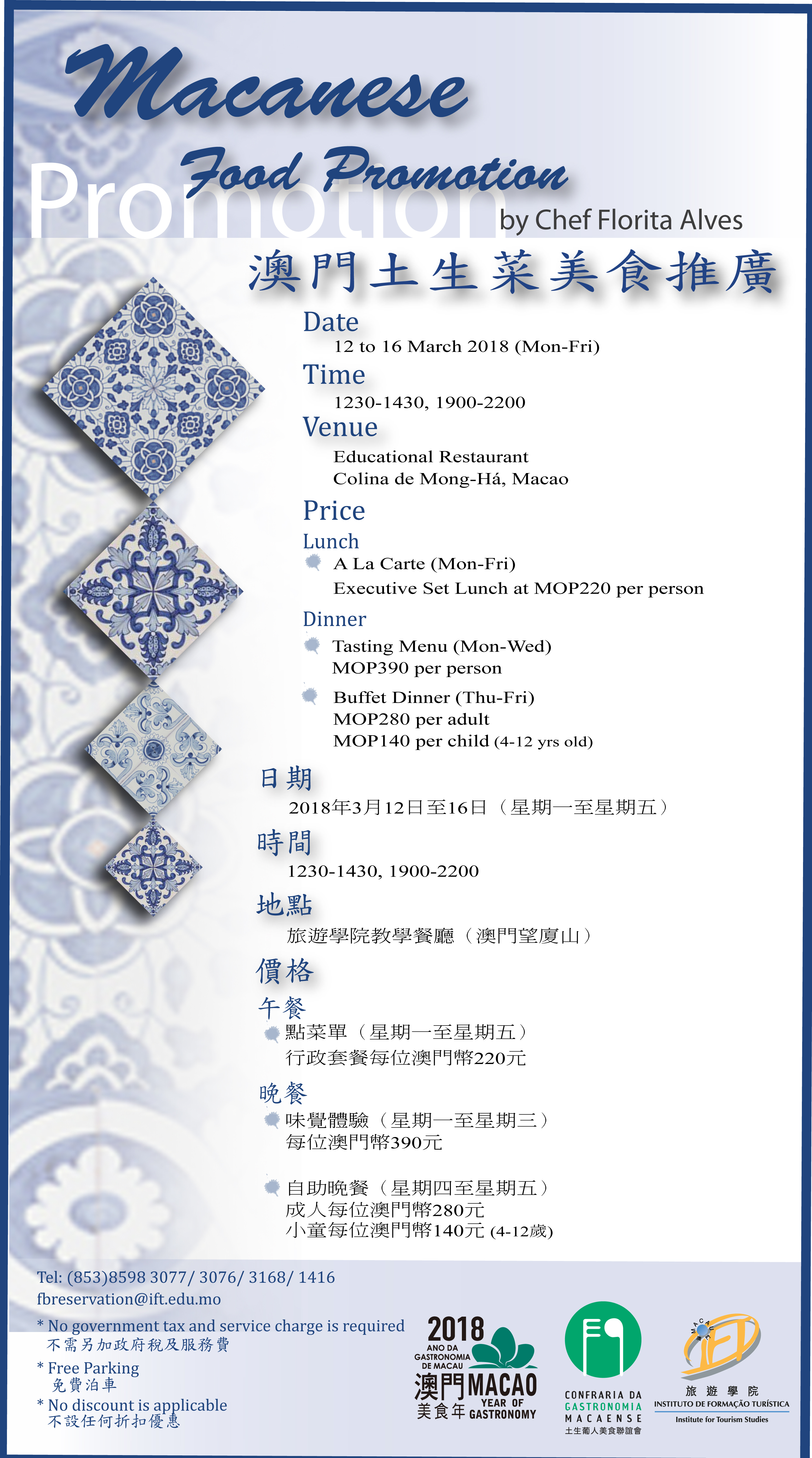 The IFTM Educational Restaurant offered from 12 to 16 March a special selection of Macanese delicacies via menus created and prepared by Chef Florita Alves. 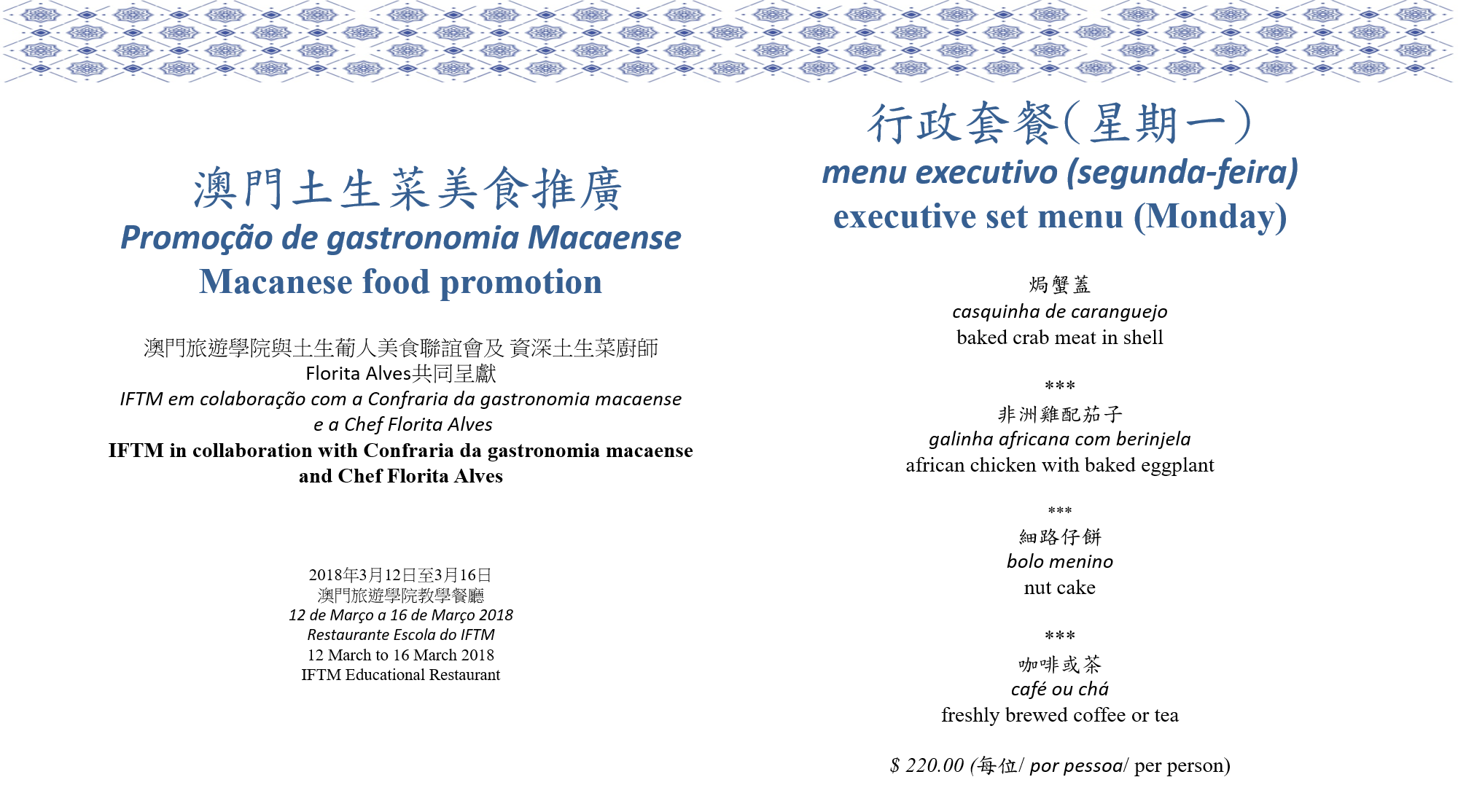 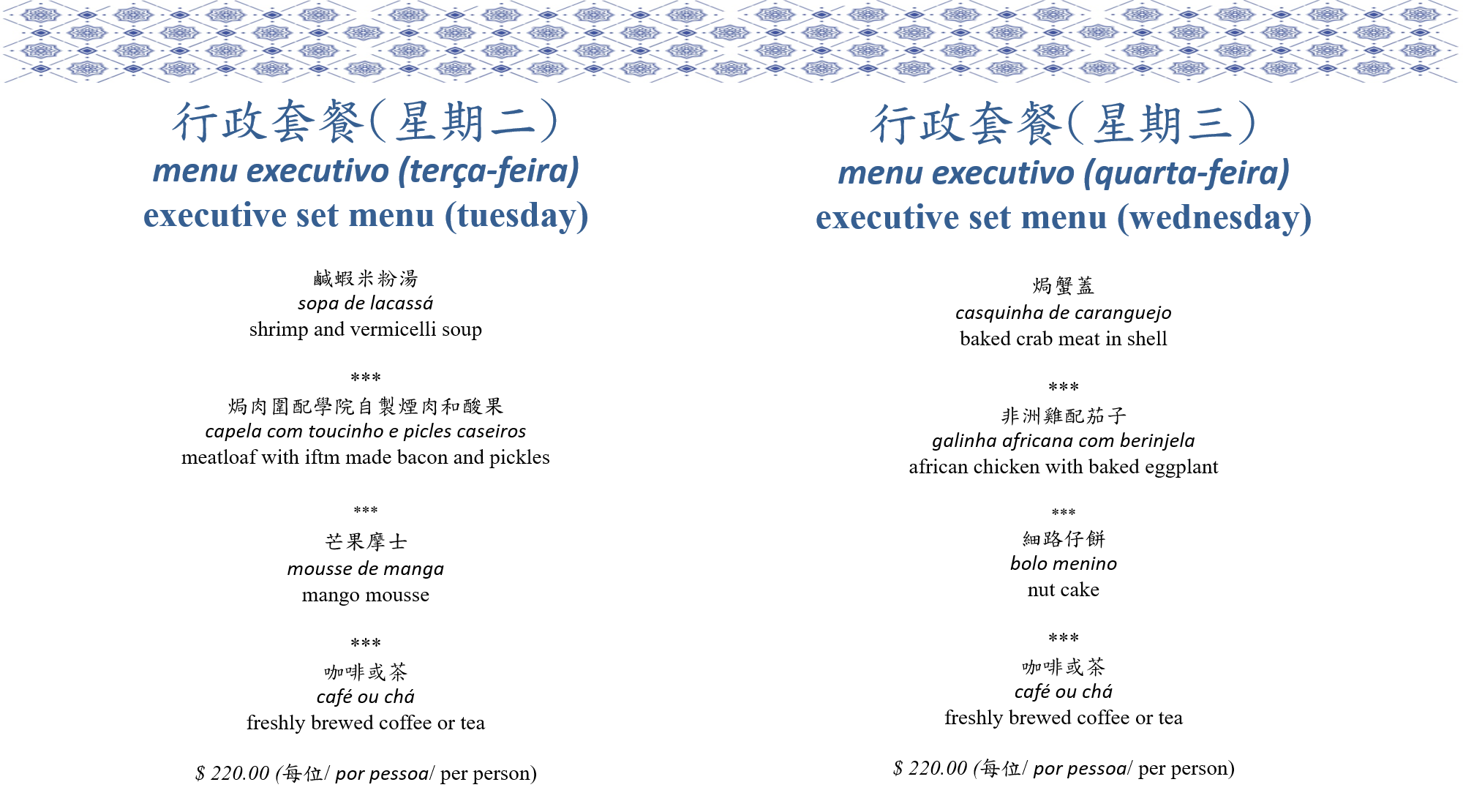 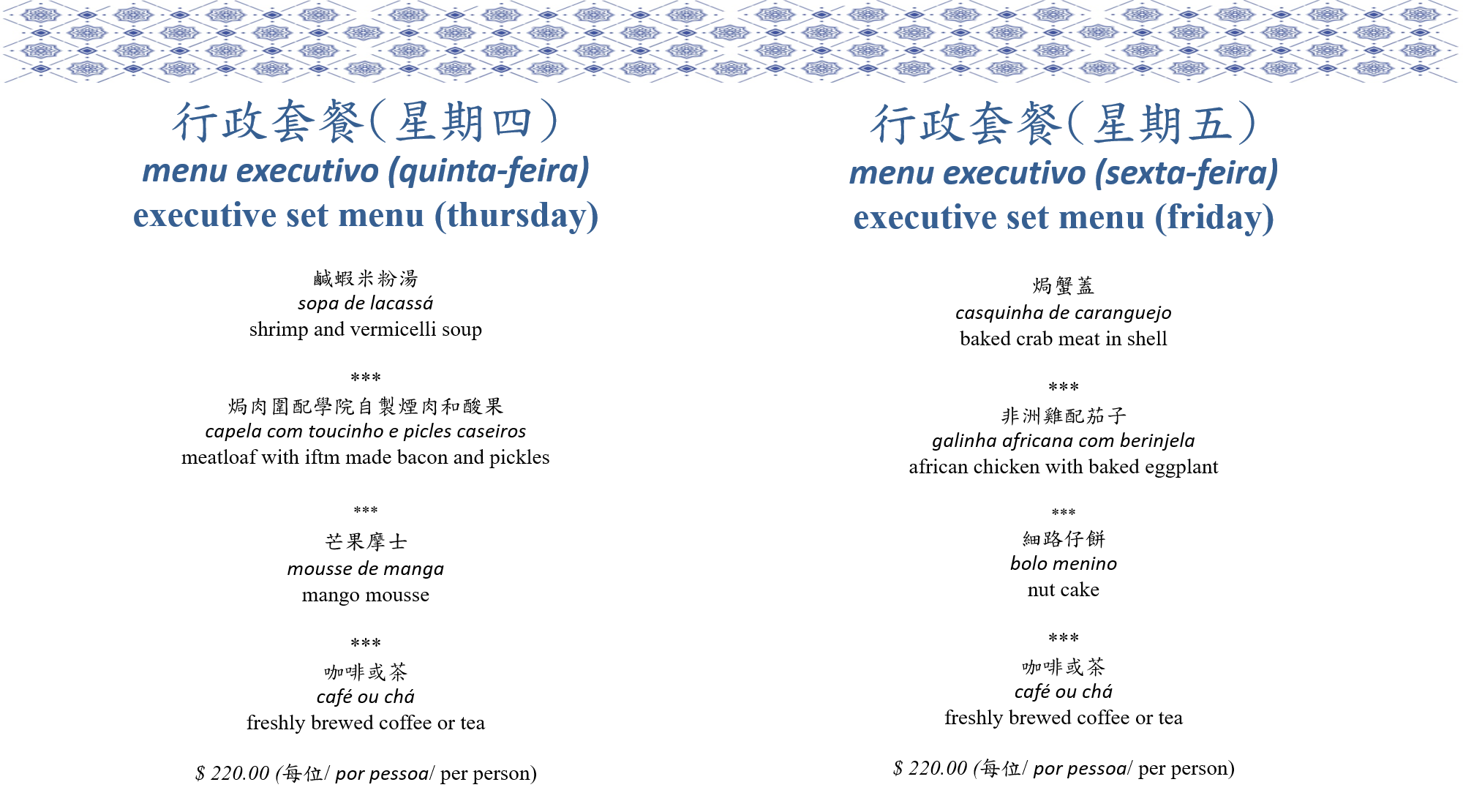 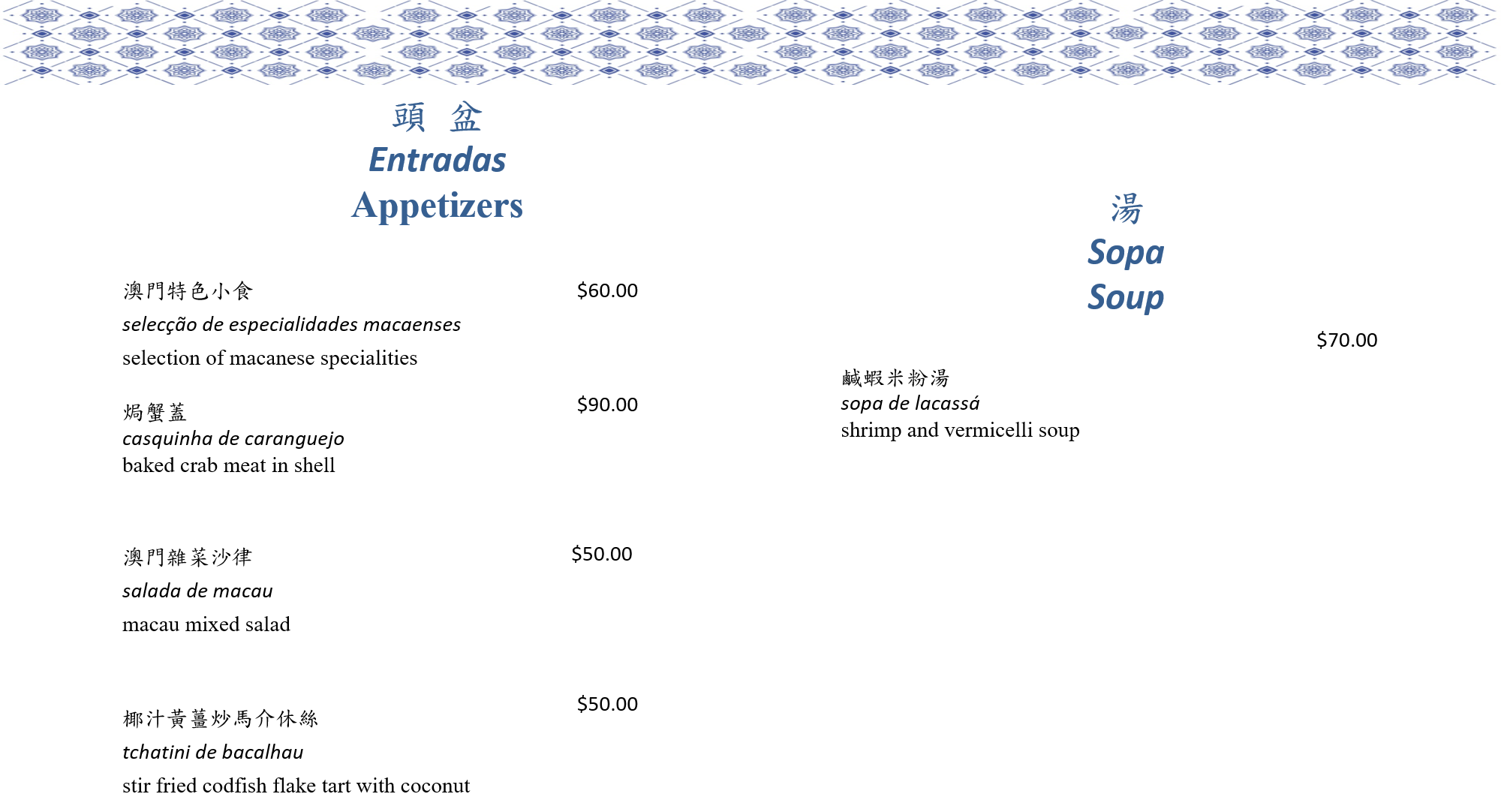 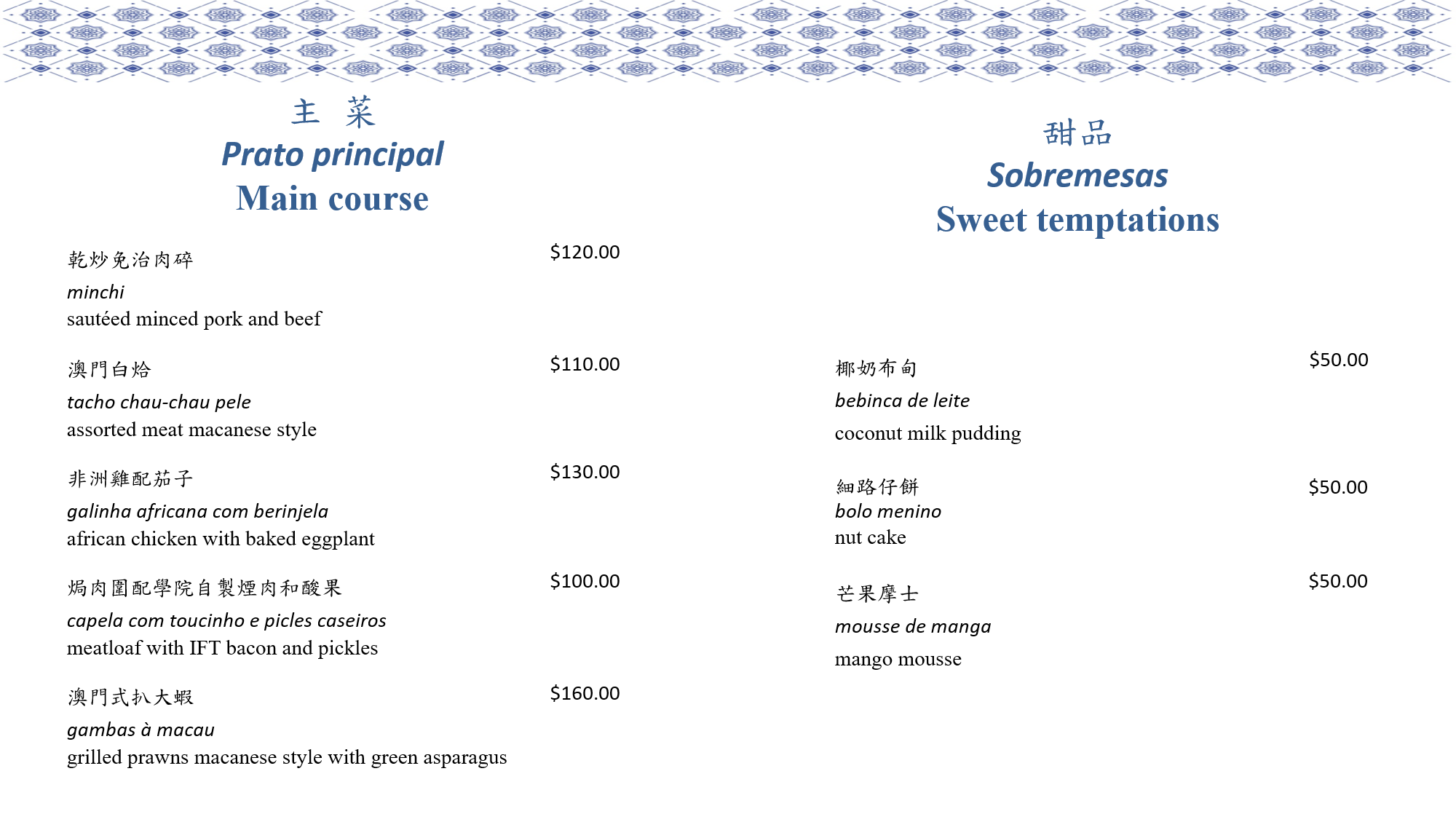 The IFTM Educational Restaurant offered from 12 to 16 March a special selection of Macanese delicacies via menus created and prepared by Chef Florita Alves. Guests had a chance to enjoy authentic Macanese specialities ranging from “casquinha de caranguejo” (baked crabmeat in shell) to “minchi” (sautéed minced pork and beef) and “bolo menino” (nutcake). The food promotion was held in partnership with Confraria da Gastronomia Macaense – a body aimed at promoting Macanese cuisine. The term “Macanese” refers to the city’s Eurasian population; those with ancestral ties to Portugal, Mainland China and/or to Portugal’s former colonial outposts, such as Goa and Malacca. The Macanese have a distinct social and cultural identity, cuisine and creole language called Patuá. Over the centuries, Macanese cuisine blended Southern Chinese and Portuguese flavours with exotic new ingredients brought by Portuguese sailors. The result is a mix of influences from Europe, Latin America, Africa, India, Southeast Asia and China. In 2012, Macanese cuisine was included in the city’s official intangible cultural heritage list; last November, Macao became a member of the UNESCO Creative Cities Network in the field of gastronomy, with Macanese food – often dubbed as the “world’s first fusion gastronomy” – playing a role in UNESCO’s decision. The Government has repeatedly stressed the importance of Macanese cuisine in the city’s unique gastronomic culture, and in the development of a sustainable tourism industry, as Macao works to transform itself into a world centre of tourism and leisure. The Macanese food promotion at the IFTM Educational Restaurant is part of IFTM’s efforts to assist in increasing consumer and industry awareness of this gastronomy. The Institute has met that objective also by offering Macanese cuisine training courses and by hosting cooking demonstrations. IFTM and Confraria da Gastronomia Macaense signed in 2010 a cooperation agreement to promote Macanese cuisine. On 5 March, the two parties co-organised a cooking demonstration at the IFTM Mong-Hà campus. The activity was headed by Chef Alves and was attended by 28 food and beverage industry professionals. Macao-born Chef Alves has travelled to several countries to promote Macanese food. During the IFTM event, she demonstrated several cooking techniques used in Macanese cuisine, and taught participants how to cook some signature Macanese dishes. “We have to do more and put more effort in injecting new life into Macanese gastronomy,” Chef Alves says. “We do not want this cuisine to become something described in a past tense.” The local chef has previously conducted cooking demonstrations for IFTM students. She says many students – namely exchange students from European countries – display great interest in the origin and recipes of Macanese cuisine. The head of the Confraria da Gastronomia Macaense, Mr. Luis Machado, says it is crucial to promote Macanese cuisine to a wider audience, now that Macao is a member of the UNESCO Creative Cities Network. Mr. Machado praises IFTM for its efforts to ensure future chefs know more about authentic Macanese gastronomy, so they can become its ambassadors upon graduation and upon entering the food and beverage industry. “I see there is a new generation in Macao very interested in Patuá and also in Macanese food,” he says. IFTM has included Macanese cuisine in the curriculum of its bachelor degree programs, in order to allow students to learn about the origins, preparation and characteristics of this gastronomy. In addition, the Institute plans to establish a gastronomy centre, that will incorporate research and training on Macanese cuisine. 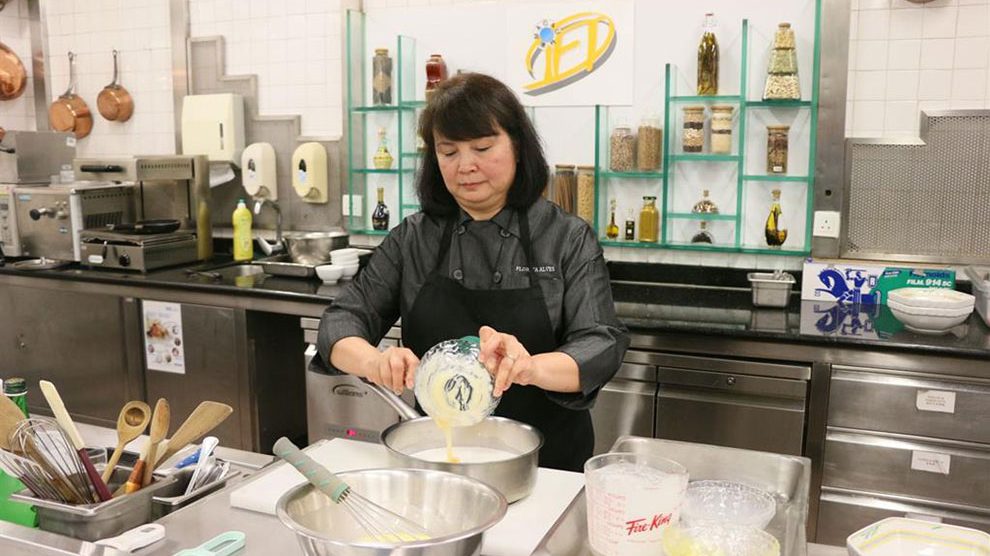 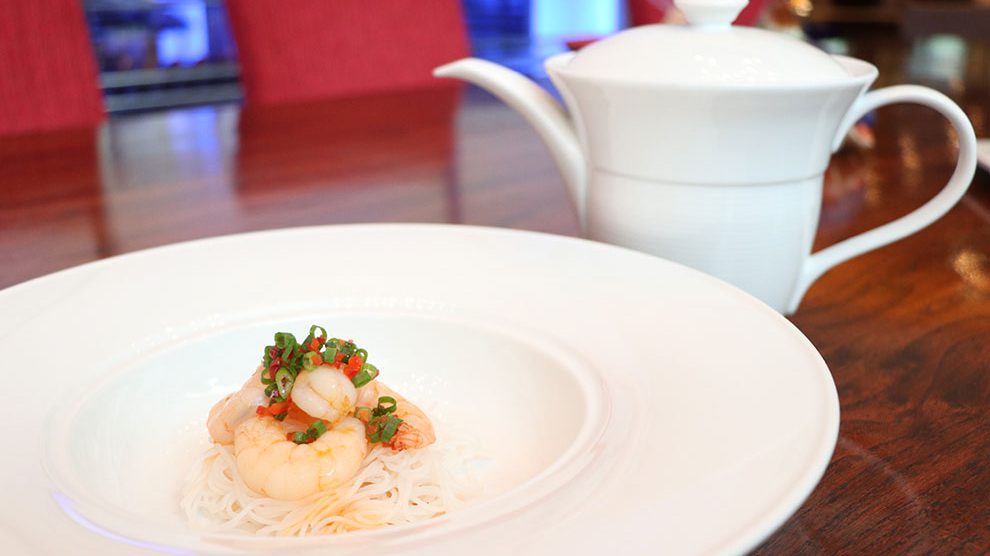 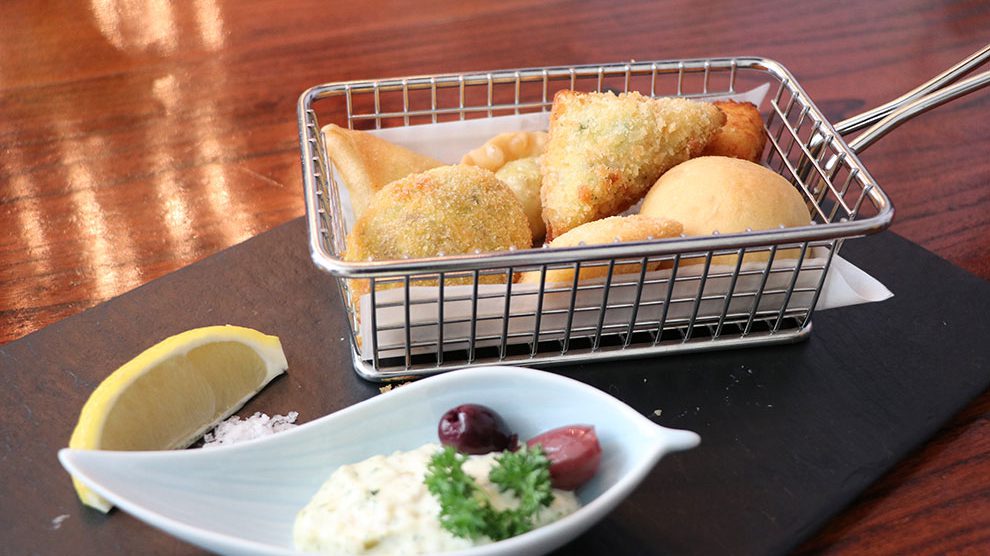